The early pioneers moved to what is now Northeast Tennessee during the mid to late 1700s. Most of these people came from North Carolina and Virginia. The residents that lived in Northeast Tennessee lived in Washington County, Sullivan County, and Greene County. These were the first permanent settlers in this area besides the Cherokee Indians. If the move itself wasn’t hard enough, once they arrived to the property a house needed to be built and a farm needed to be started. The early pioneers lived simply but worked extremely hard. There was no electricity or running water, so cleanliness wasn’t a necessity like it is today. Their homes were heated by wood fires and there was no insulation, making the winters unbearably cold. The food was cooked over the open hearth and could take hours, sometimes all day, to make a meal. Everything is much easier for us now thanks to indoor plumbing, vacuums, and light switches. During the time of the early pioneers, people used what they could make by hand and families worked hard together.

How the Early Pioneer Activity Box Relates to Tipton-Haynes

Colonel John Tipton was born in Maryland in 1730. His ancestors moved to Maryland after emigrating from England to Jamaica. He moved to Frederick County in northern Virginia around 1750 where he met his first wife, Mary Butler. He and his family moved from Virginia to East Tennessee in 1783. During this time his 100 acre property was territory of North Carolina. They lived in a one and a half story log cabin with one room downstairs, a kitchen in the basement, and two bedrooms upstairs. Everyday life for the family consisted of working on the farm all day, cooking, sewing clothes, mending shoes, sweeping, and reading in the evening. They would have used the everyday items like those found in this box.

Students will become familiar with the household items that the Tipton family and other families in the area would have used every day. Students will learn about the life of Colonel John Tipton and his family through discussion. Also, students will be taught about the early pioneers who first settled present-day Northeast Tennessee. By using replica artifacts of the time period, students will visually learn about the lifestyle of the Tipton family and other pioneer families. Students will learn how daily life has changed from the eighteenth century to the present day through artifact analysis. 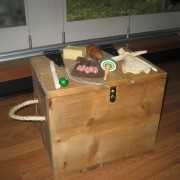 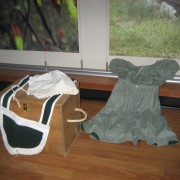